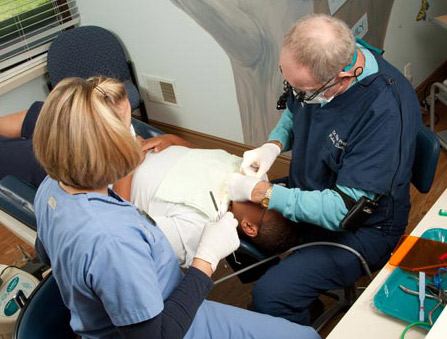 Many patients regard the dental office as a house of pain – a place to be endured, with literally a stiff upper lip, when they can’t avoid it. But a few dentists have started to soften that image by using a laser rather than the fearsome drill for such procedures as removing tooth decay and filling cavities.

Cleared for dentistry use last year by the Food and Drug Administration and reaching the market in December, the carbon dioxide laser produces rapid pulses of infrared light at a wavelength that the teeth absorb particularly well.

Early adopters have applauded it. “It’s quite remarkable,” said Boston-based dentist Mark Mizner, who has used it to treat 100 to 150 patients by his estimate. “It cuts cleanly, and it cuts decay as easily as it cuts through the healthy tooth. It also cuts soft tissue like nothing I’ve ever used before.”

Added John Featherstone, dean of the University of California, San Francisco School of Dentistry, whose research laid the foundations of the laser’s dental capabilities: “It’s a quantum leap forward in terms of dentistry.”

Featherstone emphasized that he has no economic or contracting connection to the maker of the laser device, Convergent Dental Inc. of Natick, Mass. The company calls the device Solea.

A key property of the laser is a numbing effect that can preclude the need for anesthetics. According to informal surveys of customers, “95 percent of procedures are anesthesia-free, and 98 percent of patients report no pain,” said Mike Cataldo, CEO of Convergent Dental.

The first commercial dental lasers emerged in the early 1990s. Until recently, however, dentists used them mainly to treat soft tissue, such as the gums, and to whiten teeth.

Then in 1998, the California company Biolase introduced the Waterlase. This is an erbium laser whose beam vaporizes water in a tooth, which then chips off the enamel as it expands.

The Waterlase also treats soft tissue. And more recently, carbon dioxide lasers with a wavelength of 10.6 microns have received approval for use on soft tissue in the mouth.

The infrared power of carbon dioxide lasers comes from the release of energy after pumping an electric current into a chamber containing the gas. Erbium lasers are stimulated in a similar way in solid material containing small amounts of the rare earth element.

In contrast to the Waterlase, the Solea laser vaporizes hydroxyapatite, the mineral that makes up about 90 percent of tooth enamel, as well as the water that is responsible for roughly 5 percent. “It literally vaporizes enamel,” Cataldo said.

Like the traditional drill, the procedure removes decayed portions of damaged teeth and helps prepare the area around cavities for fillings.

The laser’s efficiency stems from two sources. Its wavelength of 9.3 microns falls within a narrow range that hydroxyapatite absorbs, a process that causes the mineral to heat up. And its ability to fire up to 10,000 pulses per second permits dentists to work at high speed. The Solea, Cataldo said, works like a chain saw cutting a tree, while other dental lasers resemble axes.

Convergent designed its laser system to resemble the traditional dental drill, with a hand-held device and a foot pedal to control the speed of cutting. “I didn’t need practice with it; it’s just a different tool,” said Mizner, who had originally expressed skepticism about any laser technology.

Although a computer determines the pattern of laser pulses for a particular section of a tooth, the dentist still controls the process. While few patients feel pain from the laser pulses, “about half of them feel what they describe as ‘cold,’ ” Mizner noted. “So all I do is turn down the power and sacrifice a little speed. It cuts more slowly, but patients don’t feel the laser or the filling – things that typically hurt when you’re not anesthetized.”

When the FDA approved the Solea, Cataldo insisted on being the first patient to go under the beam. “I put my mouth where my money was,” he joked. “I never felt anything.”

The system is not a complete answer for dentistry. It is not ideal for use with crowns, Mizner said.

Meanwhile, dental researchers are focusing on a further advance involving lasers: to regrow parts of broken teeth. A team lead by Praveen Arany of Harvard University reported in Science Translational Medicine that laser light has activated a growth factor that repairs intentionally damaged teeth in rats. The team is now studying a similar process of regeneration in human teeth.